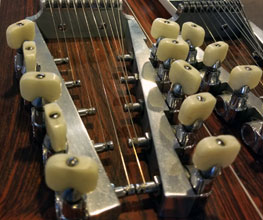 The pedal steel guitar is a very unique instrument. It has actually evolved over the years dating back to the early 1930's with the electric lap steel. Soon legs were added and the instrument was called a console steel. With the need to have some versatility in playing songs in different keys and scales, the addition of an extra neck tuned to a specific tuning seemed to be the logical answer at that time. People such as Charlie Christian Boggs, Noel Boggs, Leo Fender, Leon McAuliffe, and Santo were all involved in the progress of the electric lap steel with multiple necks.

Even with the strides made by adding an extra neck or two to the lap steel, the musicians were still limited and they knew it. Players tried everything to be able to play on the songs they loved. Multiple necks, adding extra strings, various tunings, and bar slanting. Even with all this there was something missing. But, even with these limitations players such as Herb Remington, Jerry Byrd, Joaquin, and Leon McAuliffe push onward and made fantastic music with what they had to work with.

The late 1930's and early 1940's the light bulb went on and pedals were added to the electric lap steel. Alvino Ray is credited to having pedals added to the electric lap steel. The Gibson Corporation in 1940 created the Electraharp which allowed the musician to change the pitch of certain strings without the use of a bar by using floor pedals. Gibsons system of pedals seemed to work very well for the Electroharp.

One of the first electric steels to actually have pedals was designed by Paul Bigsby most notably known today for his vibrato tail piece used on many electric guitars even to this day.

Even with the addition of floor pedals steel players of that day still needed more versatility. It is noted that in 1952 Zane Beck who played for Hank Williams, Jim Reeves and many other notables, was credited to adding knee levers to a console steel.

Bud Isaacs is credited to adding a pedal to his console steel and was the first to record a song and change the pitch of two strings while holding a chord and thus the crying pedal steel guitar sound we hear today was born.

In the 1950's Buddy Emmons and Jimmy Day were credited with more innovations. Both propelled the pedal steel and how we approach this instrument into a brand new light. At this time, many changes were implemented and basically what came from most of these innovations is our modern pedal steel guitar as we know it today.

Over the years many people influenced and contributed in one way or another to the advancement of the pedal steel guitar. Either by innovations or by breakthroughs in how they played the instrument. Names such as Buddy Emmons, Jimmy Day, Paul Franklin, Lloyd Green, Jeff Newman, John Hughey, Weldon Myrick, are some of the prominent names but there are others as well.

Well, we covered a lot of ground but hey, what about tuning? Yes, lets get into that right now.

If you are new to the pedal steel or if you are a guitar player wanting to learn the pedal steel this bit of information about tuning will be priceless. if you ever tuned a regular guitar with an electronic tuner you will know that each string is tuned with the tuner dead on that specific strings note. Example; the "A" string is tuned so your tuner is dead on "A" or 440. You would proceed to tune each of your regular guitar strings so they each are dead on to their respective note. Low "E" dead on according to your tuner, "D" dead on "G" dead on and so on until you get all six of your strings in perfect tune. Now you are ready to play the electric six string guitar. Now, if you take that exact same approach and tune your pedal steel guitar, you will be out of tune. Yes, out of tune. The pedal steel needs to be compensated or tempered when tuning. You can not tune each string to dead on for the pedal steel. You have to compromise somewhat. Some strings will be tuned slightly flat while other strings are tuned slightly sharp. Sounds crazy but this actually works. We have provided a visual chart from Jeff Newman. Jeff Newman put this together and shows the + or - when using an electronic tuner with increments in numbers for sharps and flats. If your tuner does not show precise increments for sharps and flats all you need to know is for your specific string it needs to be slightly sharp or slightly flat and Jeff Newman's chart will show you each string for this. If you follow this chart your pedal steel guitar will be tuned correctly.

You may want to make minor tweaks according to your ear but the chart will get you very very close to an awesome sound.

In Memory of Frances & Jeff Newman 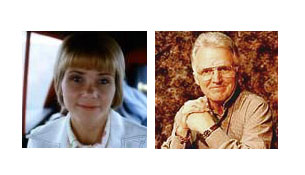